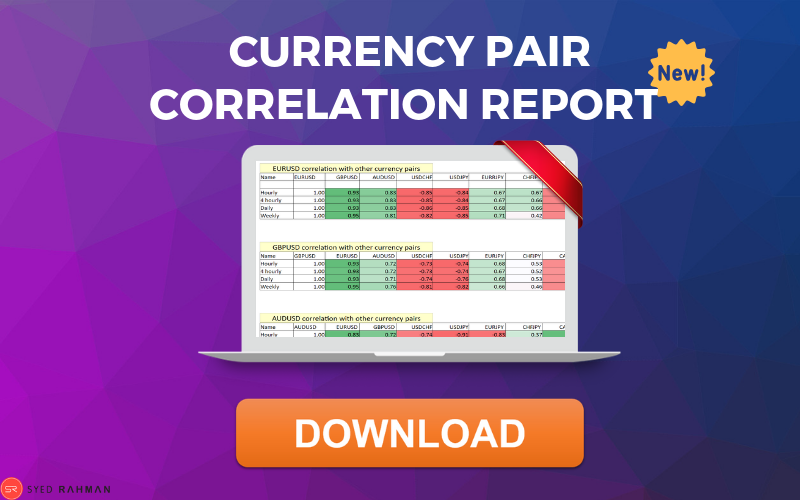 Many of my students and audiences asks me which Forex broker I trade with or recommend them to trade, so I wrote an article mentioning the key features I look for in a broker to join and, and in that article I referred 2 of the brokers names and informations about the broker to choose.

learn which Forex broker i recommend

CLICK HERE  to learn more, or enroll in the course!

Why understanding the currency pair correlation is so important?

​Understanding currency pair correlation is very important for a Forex trader in order to maintain proper money management and not multiplying the risk size in each of the single trade.

Look at both of the chart images below, the top one is EURUSD and the bottom one is GBPUSD. Both of these charts are in daily time-frame, which means each of the candlestick bars represent one single day's of price movement.

Now, if you look carefully, then you will notice that both of the chart price actions are almost the same. Both of these pairs are trending upward at the same time though the pip value is slightly different than each other.

Which means, If you find a strong trading signal in EURUSD, then most likely you will also find a same type of trade signal on GBPUSD. In this case, if EURUSD goes up, then the price of GBPUSD will also rise up.

See the same chart images below after a few days later- You can see from the above chart images that how nicely GBPUSD has followed the direction of EURUSD or vice versa.

Now, should you trade both of these currency pairs at the same time?

The answer is no. You should not take trade entries on both the currency pairs at the same time; since this will only increase your risk of losing more capital.

For example, if you traded long at both of the bullish candles of EURUSD and GBPUSD at the same time, then you could grab more than 500 pips on EURUSD and 800+ pips on GBPUSD. It is a huge amount of profit, right?

But what if price changes its momentum and start to fall down after you traded long on both of these currency pairs? you could then lose double amount of losses since both of the currency pairs will hit your stop loss. Which no one would like to face.

So, why does both of these currency pairs tend to move at the same direction?

Positively correlated currency pairs are those, which moves at the same direction at the same time, by making almost the same kind of price action pattern in the market depending on their correlation strength. This can happen in the bullish and bearish market as well.

So, in the above scenarios, EURUSD and GBPUSD both are positively correlated currency pairs since they both tend to move at the same direction at the same time.

You can download the complete list of all the 28 most traded currency pairs with their correlation coefficient values with each other.

However, other than GBPUSD, the EURUSD has strong positive correlation with some other currency pairs like AUDUSD, NZDUSD, etc.

Now, there is another side of correlation of currency pairs, which is the negative correlation.

Negatively correlated currency pairs are those, which moves at the opposite direction of each other, by making almost the same kind of price action pattern in the market depending on their correlation strength.

Let's have a look at the same EURUSD daily chart image, but this time with another currency pair which is USDCHF

In the above chart images, the first one is the same EURUSD chart which you have seen before in our early example, but this time the 2nd one is the USDCHF daily chart.

From the chart images above, you can see that the USDCHF is moving exactly at the opposite direction of EURUSD by making the opposite looking price action patterns, which looks like the mirror image of each other.

Here, if the price of EURUSD rise up, then the price of USDCHF will tend to fall down, since USDCHF has very strong negative correlation with EURUSD and its other positive correlated pairs.

So, if you find a Buy signal on EURUSD, then you will most probably find Sell trade signal on USDCHF; and you should never trade both Buy on EURUSD and Sell on USDCHF at the same time.

That is why  you have to know the correlation between the currency pairs in order to prevent yourself opening multiple trades on several correlated currency pairs and then end up taking unwanted multiple losses.

You should not just open 7 to 8 trades on several correlated currency pairs while their correlation can affect your entire trading capital and throw you out of the market!

There are 8 major currency pairs that are the mostly traded currencies in Forex market; which are the USD, EUR, GBP, CAD, AUD, JPY, NZD and the CHF.

When these currencies pair up with each other, then we can have 28 currency pairs.

These are the mostly traded, highly volatile and liquid currency pairs in the foreign exchange market. You will find so many profitable trading opportunities in these currency pairs, no matter which time frame you follow.

Although we have 28 major currency pairs to trade, we should not trade all of them whenever we see trade opportunities in these pairs.

That is why you have to know which are the correlated currency pairs and their correlation strength or correlation coefficient value with the other 27 other currency pairs, in order to make right trading decision and to be a profitable Forex trader. You can download the latest currency pair correlation report which I use for my own trading.

Whenever you see trade signal on different currency pairs, then just open up this correlation report file and see if the currency pairs are correlated with each other or not, in order to prevent yourself making trade entries on strongly correlated currency pairs pairs.

This will help you to minimize the risk sizes whenever you open multiple trades on several currency pairs.

CLICK HERE to learn more, or enroll in the course!

Tell us where to send your latest FREE copy of the CURRENCY PAIR CORRELATION report every month!

By signing up with us, you will get the benefit of getting the latest currency correlation report for free every month directly in your email.

Forex Indicator to scan the charts